Uptight is based on the naval platform of the Darwin 102, designed, engineered and modified by Sergio Cutolo/Hydro Tec to match her Owner requests.

In general, we might say that for its layout and technical characteristics Uptight meets the American standards. According to her Owner’s wishes the yacht features a specifically designed layout with a ‘country kitchen’ which opens onto the main salon giving the whole environment an informal atmosphere and, instead of a sky- lounge, the Upper Deck hosts a panoramic Owner Stateroom. The most peculiar feature of Uptight is undoubtedly the fishing cockpit fitted as a sportfisherman’s.

The stern platform has been transformed into an enclosed cockpit with a bulwark. A ‘battle station’ has been centrally placed in the cockpit, and fishing will be carried in ‘stand up’ position allowing multiple strikes to be managed at the same time, giving more fun to the ‘fishing family’. Screwless rod holders, have been placed on the large teak caprail around the cockpit, all equipped with drainages and an easy access for periodic maintenance. Many lockers holding the famous U.S. tackle boxes “Plano” are encompassed into the fishing cockpit bulwarks while flush floor tanks with water recirculation and pump for live fish bait are located on the transom and below the cockpit floor. The adjoining lazarette is arranged cohesively with the fishing activities and include a small yet fully equipped workshop. A double Eskimo ice maker with both salt and fresh water is in the main cockpit alongside a few freezers located beneath the sofa. In order to increase the range also in terms of food loading capacity, the storage space has been improved and optimized for long term food conservation. An outstanding interior layout makes the most out of the 255GT. 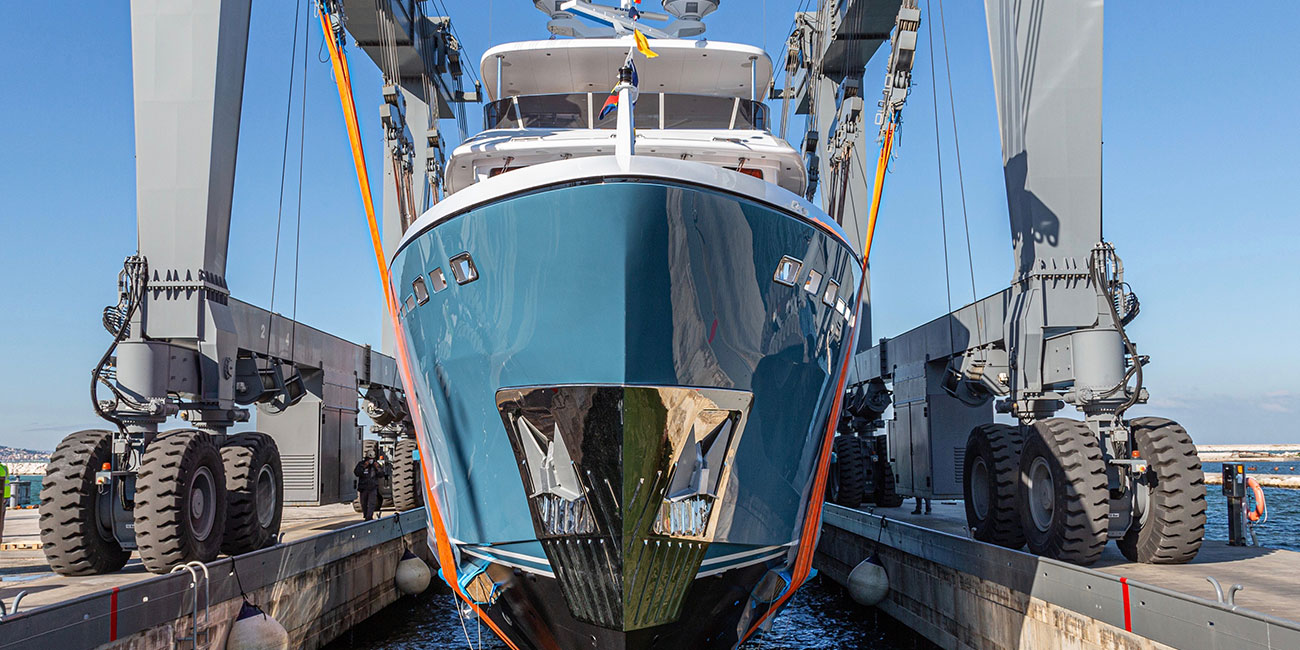 The interior, decorated by Francesco Guida, features a large and welcoming main salon with lounging and dining areas in direct connection with the galley located to port side. Three crew cabins are located on the Main deck forward alongside a crew mess. Five guest cabins – two double, a large Vip and two twins – are on the Lower deck. The Owner stateroom opens onto the Upper deck stern terrace. On the same deck there is a roomy and well-appointed wheelhouse. A large Sun deck, equipped with all amenities to spend hours en plein air, tops the yacht’s nicely shaped superstructure. To deliver a top speed of 13 knots (‘low and steady wins the race’, says the motto) the displacement hull is fitted with twin Caterpillar C18 Acert 500kW each. At around 9.5 knots, Uptight will have a remarkable range of above 4 700 nautical miles.

“We knew that our explorers perfectly fitted with American Owners’ requirements as for volumes, spaces, robustness, long range, technical reliability, functionality, no nonsense approach and, last but not least, customer care and after sale service. It has taken us a few years to penetrate the American market but we made it, eventually, as scheduled,” says Vasco Buonpensiere, co-founder and Sales & Marketing Director at CdM. “Nowadays, CdM’s yachts sail the seven seas and their unsurpassed quality has now spread on both sides of the pond. As market matures, customers get picky and most American Owners definitely know what they want. This is why I was so proud when the contract of the Darwin 106 was signed 2 years ago,” Vasco maintains. “The Owner of the Darwin 106 has a great deal of experience in yachting and is assisted by a highly experienced team. This means a lot to us. It is proof that we are doing our job properly combining construction and technical qualities with style and elegance.”

Prototype electric passenger bus is being tested at Vilnius Airport